Top 10 Best Selling Phones in the First Quarter of 2020 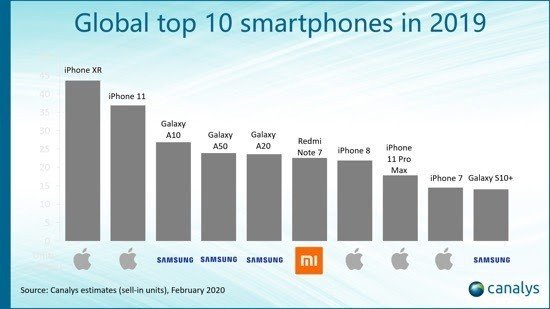 The analytical company Canalys has published a regular list of the best-selling smartphones. In the first quarter of 2020, only 3 brands reached the TOP10 - Apple, Samsung and Xiaomi.

This time, the iPhone 11 took first place with 18 million units sold, more than doubling all other models. Xiaomi Redmi Note 8 / 8T finished in second place with 8 million units sold. It was followed by the Samsung Galaxy A51 with 5 million. A total of four Samsungs appeared in the TOP10, and all of them fall into the A series. These parameters are slightly lower than the S series smartphones, but this is also reflected in a significantly lower price. The Redmi series from Xiaomi, from which 3 models were placed in the ranking, also belongs to the cheaper offer of this Chinese brand. There are 2 more Apple phones on the list - iPhone 11 Pro and 11 Pro Max. They took 6th and 10th place.